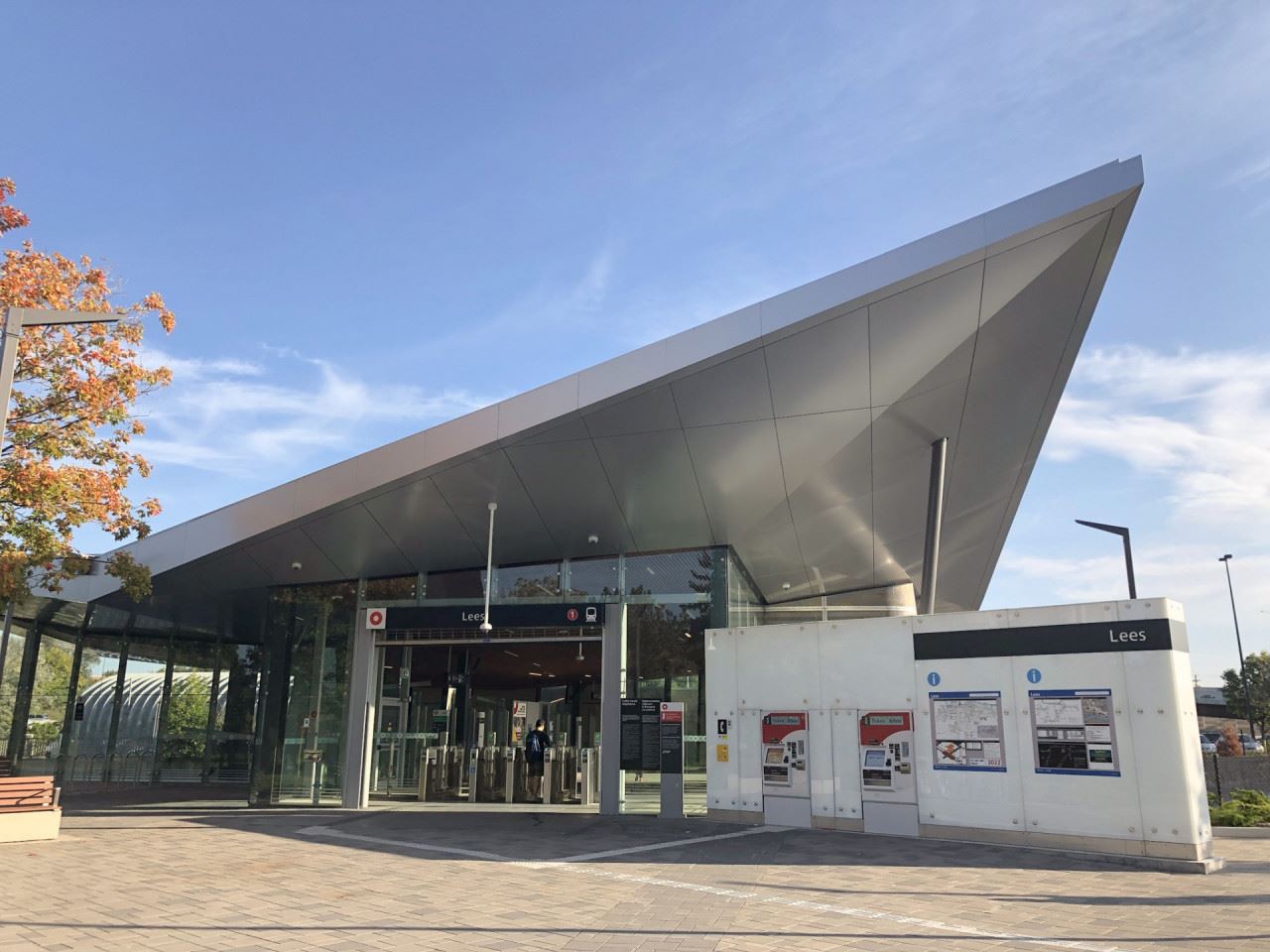 Lees Station is located between the Lees Avenue overpass and Highway 417. The University of Ottawa's Lees campus is also situated directly across the street from the station. The station provides an important link between the University of Ottawa's two campuses, by serving as a shuttle for students between both Lees Station and uOttawa station. Several large high density apartment complexes are also located within minutes of the station.

This station contains only one entrance off of Lees Avenue. Lees Station offers the opportunity to view train movements and activity, either from within the station or from the outside as the approaches from Hurdman and uOttawa Stations are easily visible. In addition, a multi-use pathway runs along the side of the station and connects uOttawa to Hurdman and beyond, giving yet another way to observe the trains in action at different points.

The station's artwork is also easily visible inside and out of the station, with several features mounted on the walls of the pathway.

The layout of the station is that of side platforms, covered by glass canopies, which feature layered patterns on the glass.

A small plaza area is located outside the station entrance, complete with benches and seating.

Overall, an unassuming station that surprises with how well it integrates into its community and neighbourhood.

One of the most unique features of Lees is its location and vantage points granted as a result. Being able to see train movements and activity in several different ways, from along the multi-use pathway, to the station itself, to the Lees Avenue overpass, and the nearby Hurdman bridge that crosses the Rideau River, Lees Station has an extensive variety of observation points all located within minutes of the station entrance, sure to satisfy the most demanding O-Train enthusiast.

The stations artwork is also very well integrated into the station. For example, the layered patterns on the glass panels that enclose the platform area blend in with the natural vegetation and green that surrounds the station. 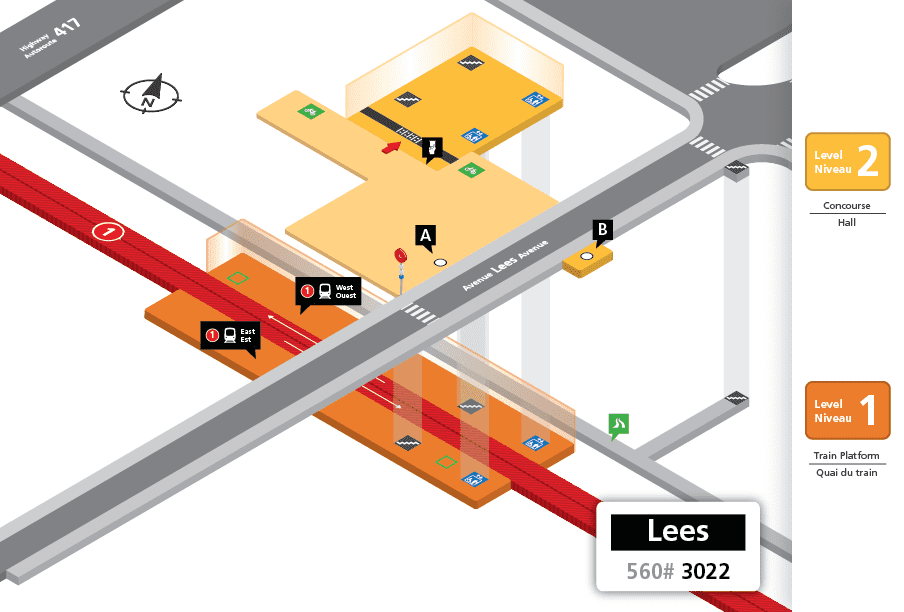 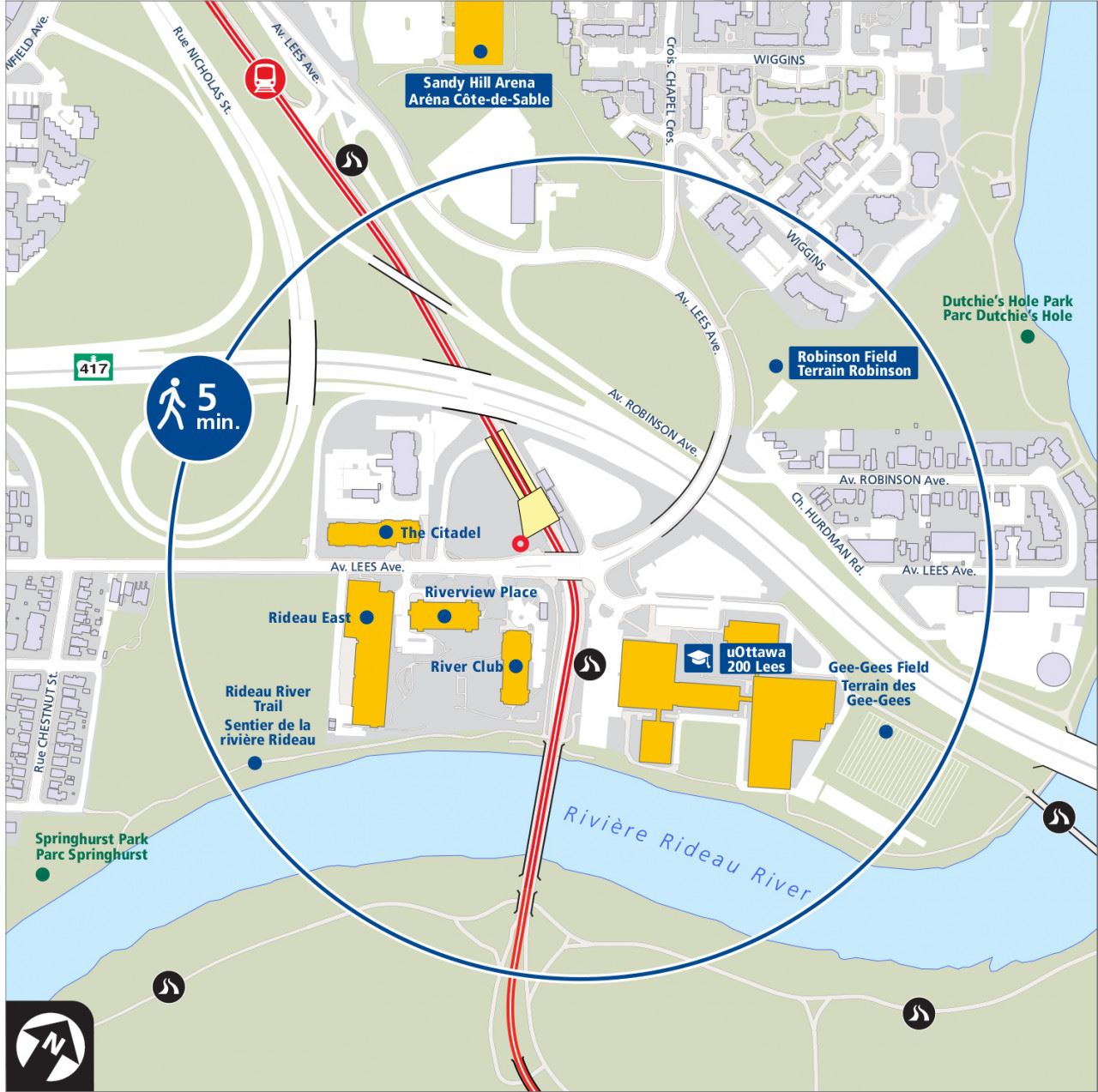 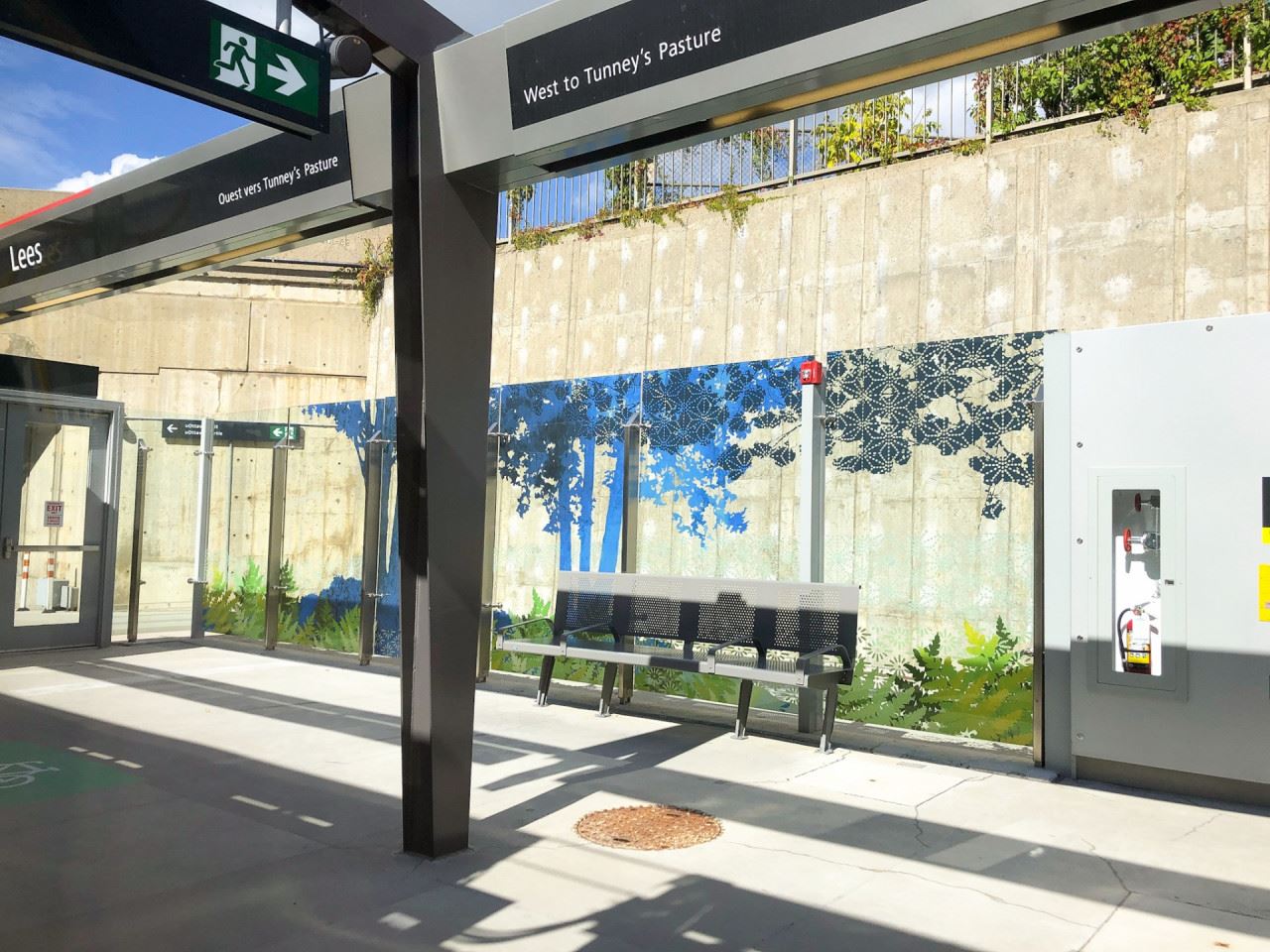 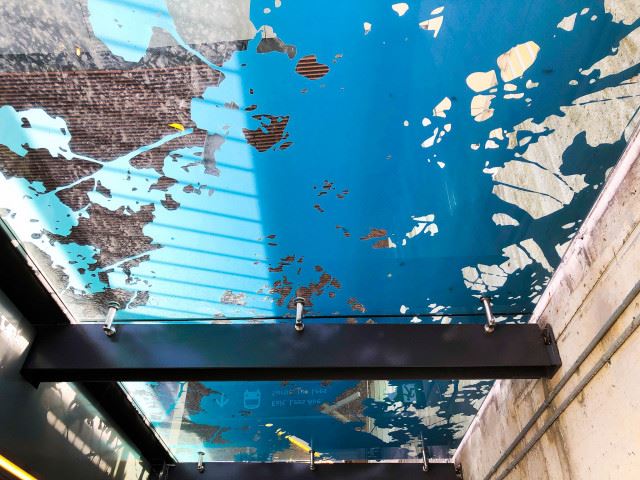 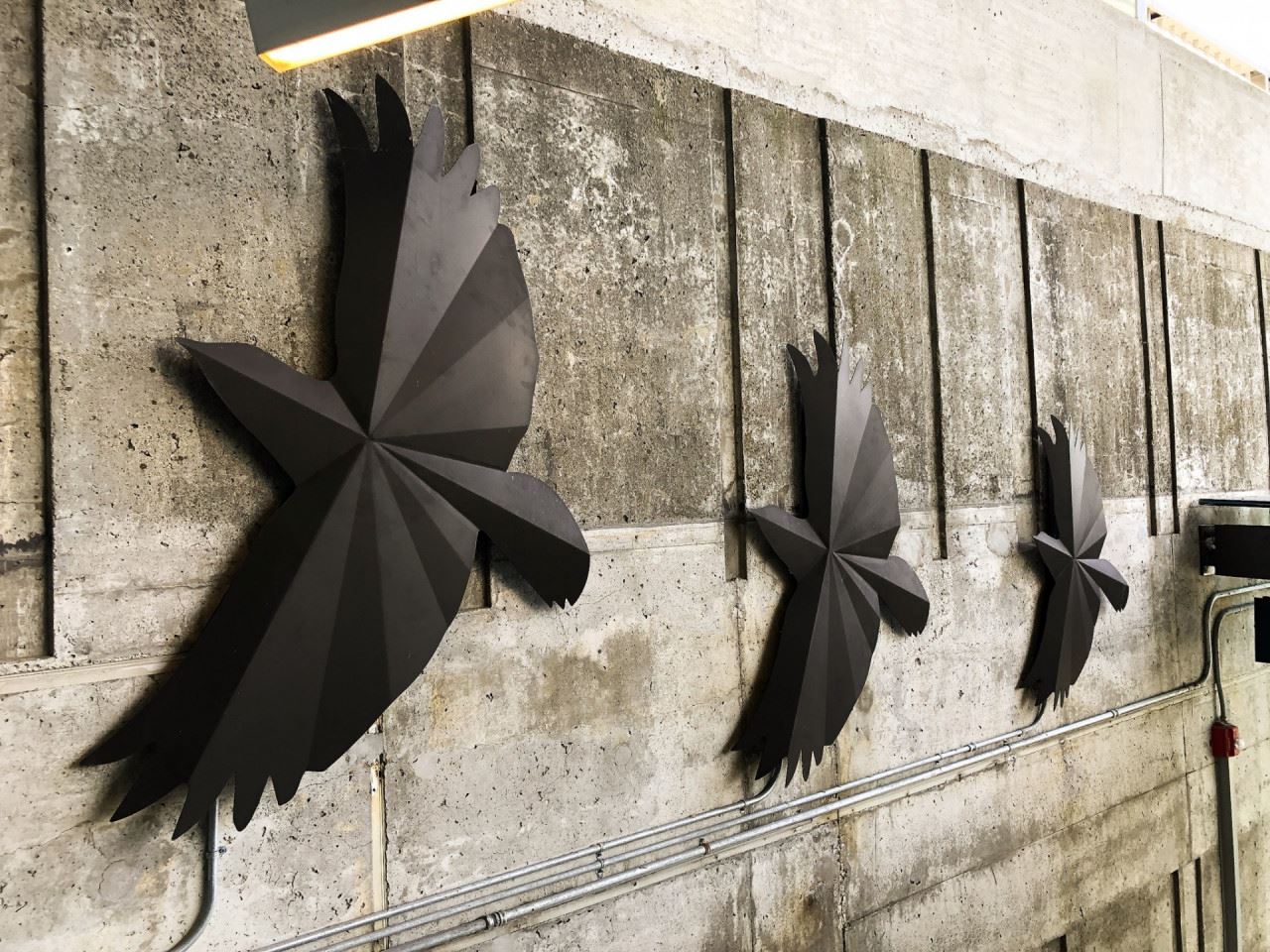 Transparent Passage consists of layered patterns on glass and sculptural elements of a bird in flight. These line the westbound multi-use pathway and are within view from the eastbound platform.

We begin this narrative with the Rideau River, its current carving and winding its way through the landscape. Animals created paths alongside the river, then groups of humans followed, hunting and gathering, then building and industrializing. Invisible trails are marked in the sky by birds, while history is quietly recorded through more tangible signs, such as the oxidization of metal and the rings expanding within the trunk of a tree. These traces form a compendium, but instead of following a linear narrative, a more natural, dynamic tale of the area is told, where the layers of history and meaning both overlap and are built one on top of another.

By using symbols from various time periods pertinent to the area, along with a natural colour palette that represents the passing of time, Transparent Passage captures both the tangible and intangible layers of history and gives a simultaneous sense of our place within this journey. 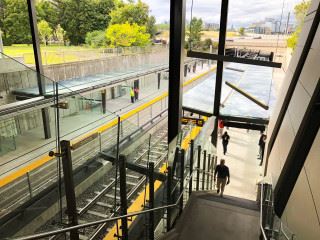 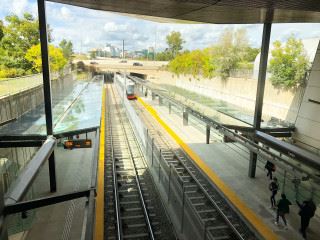 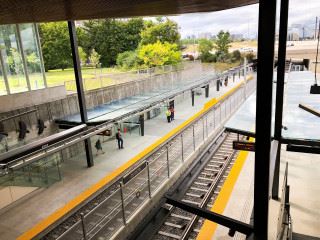 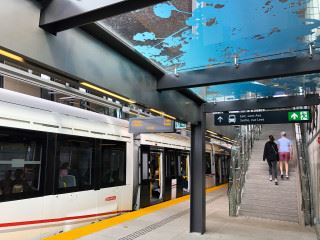 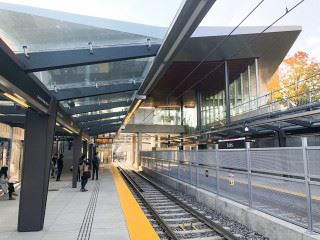 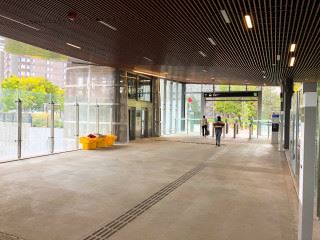 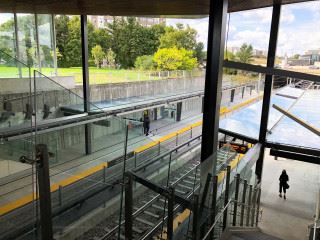 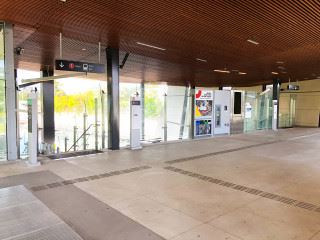 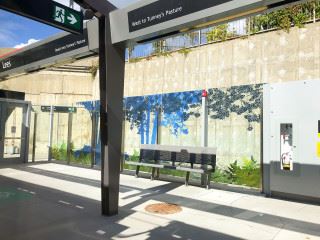 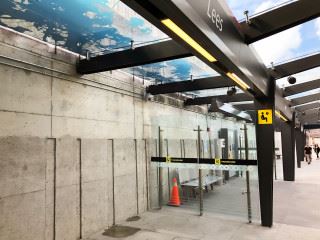 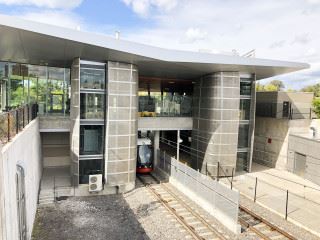 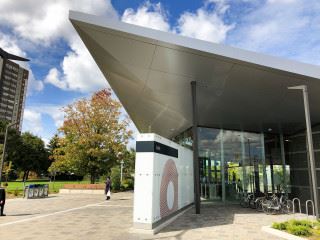 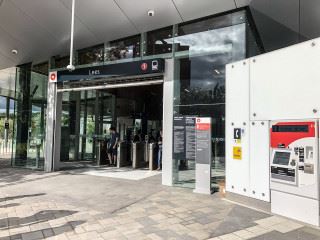 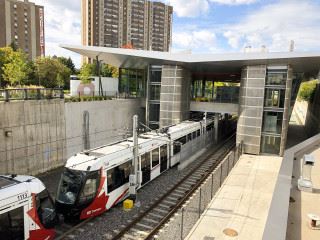 Related to this article