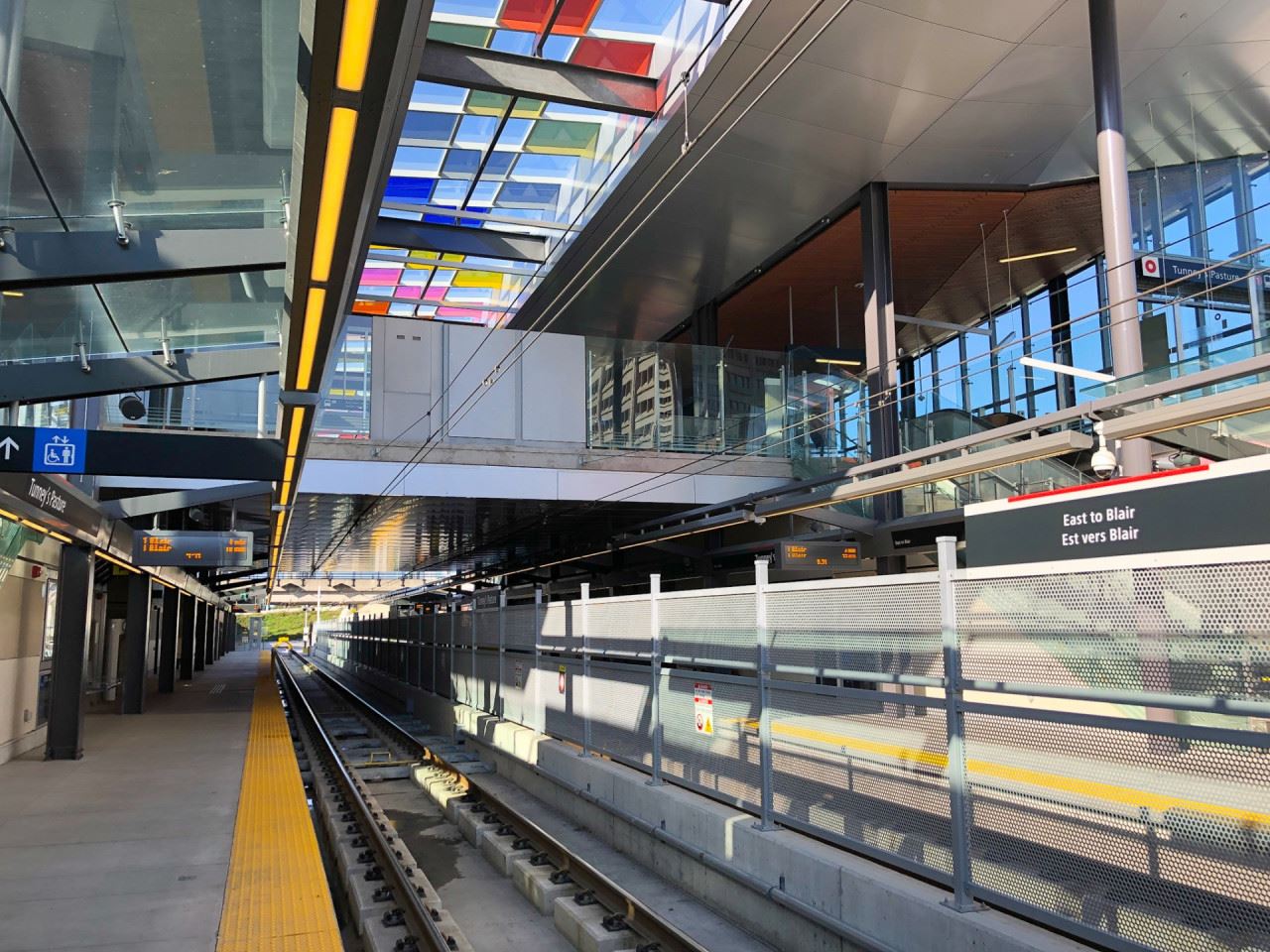 Tunney's Pasture is the current western terminus of the Confederation Line, until 2025, when the line is extended further west as part of Stage 2. This station serves the expansive Tunney's Pasture federal government complex, the neighbourhoods of Hintonburg, Wellington West and Mechanics Ville. This station is also among the busiest on the Confederation Line due to its current role of terminus for passengers heading to and from the south and west.

As the station is the western terminus of the Confederation Line, the accompanying bus loop located outside is very large in scale, and able to accommodate all westbound bus routes arriving and departing from Tunney's Pasture to destinations such as Kanata, Nepean, Barrhaven, and more.

The main concourse is very spacious and open air. The western end of the concourse will see the arrival of Happy Goat Coffee shop in early 2020, one of four stations to receive a retail outlet.

The artwork in this station features a massive stained glass skylight element, which casts coloured light patterns across the floor throughout the day. In the stairs as well as on the platform level, more artwork in the form of a mosaic wall mural is on display, made up of glass tiles. Overall, these elements combine to create a very colourful environment in such a busy station.

Tunney's Pasture is one of four stations to receive a retail outlet within the station concourse. The Happy Goat Coffee shop will open early 2020, serving coffee, drinks and local foods to passengers.

The stunning station artwork creates an ever changing ambience throughout the day as the sunlight shifts from east to west, casting colourful light rays onto the concourse floor.

Being one of the three main bus transfer stations on the Confederation Line, the bus loop is extremely large in scale, and serving over 50 bus routes. 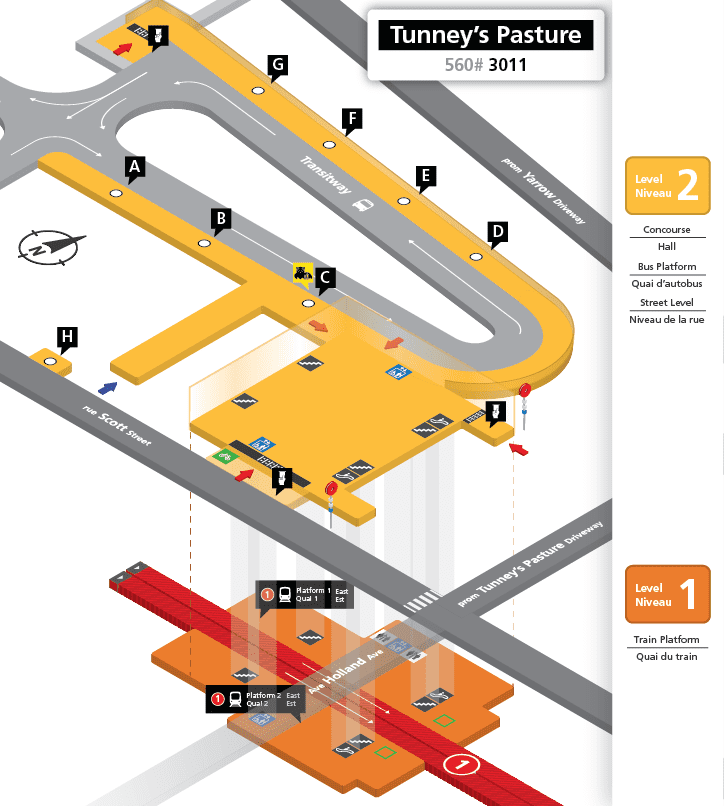 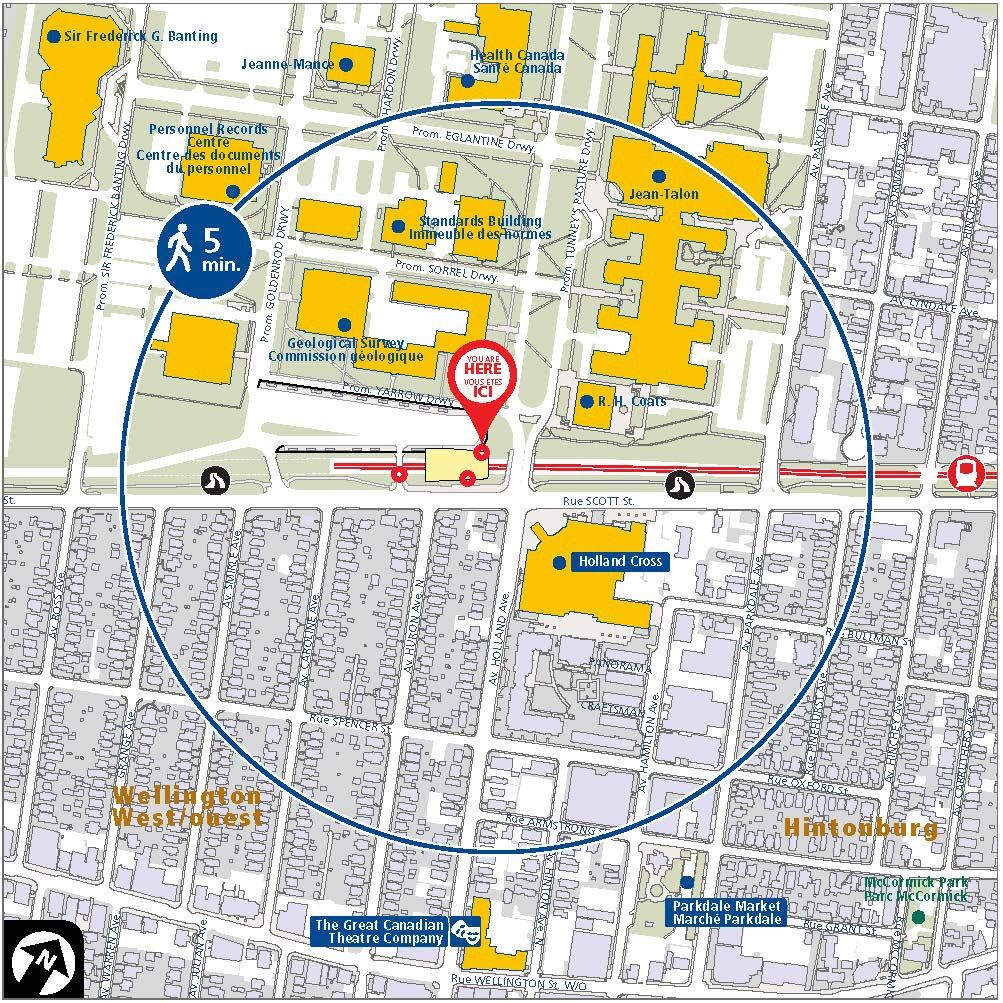 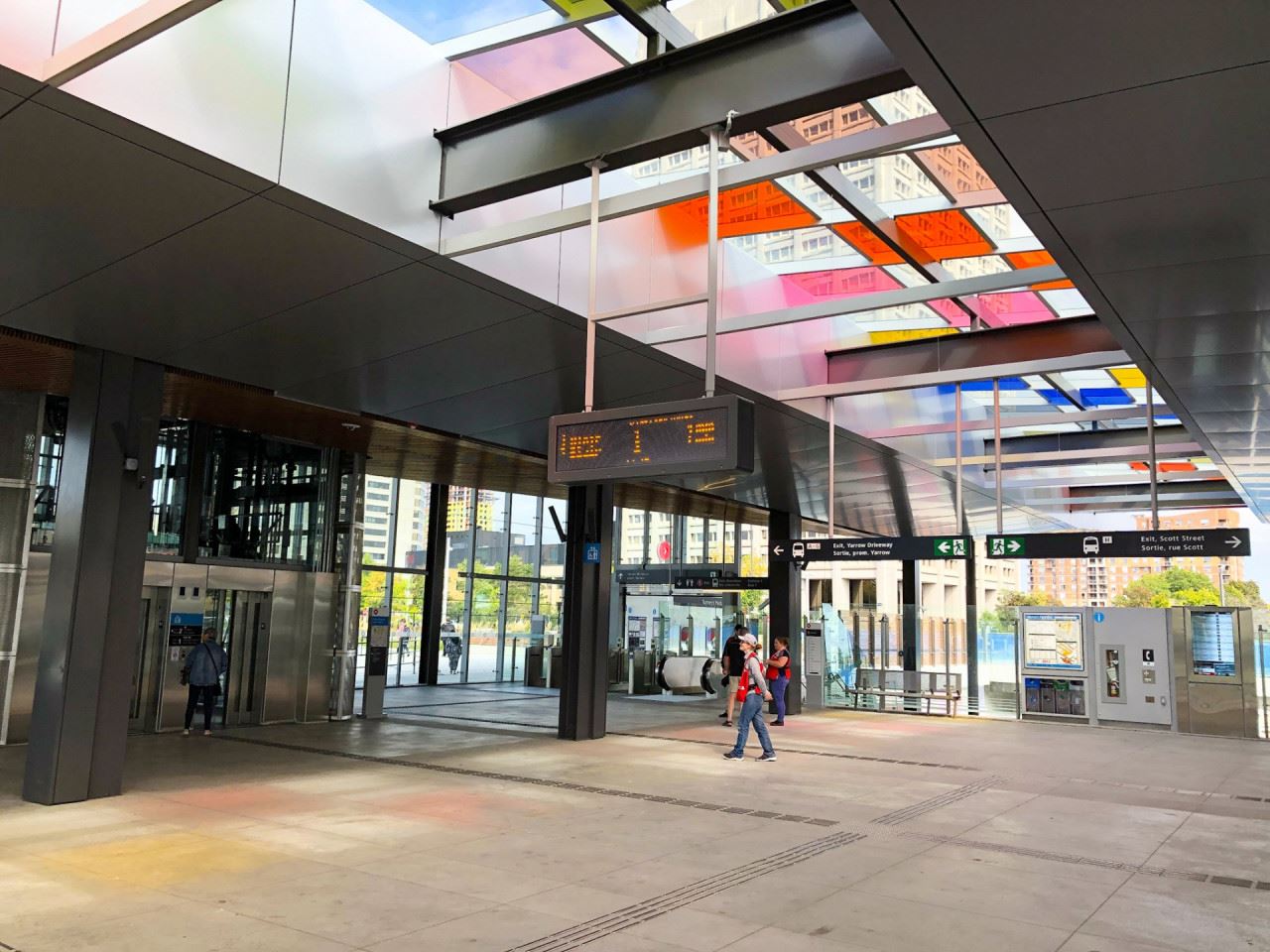 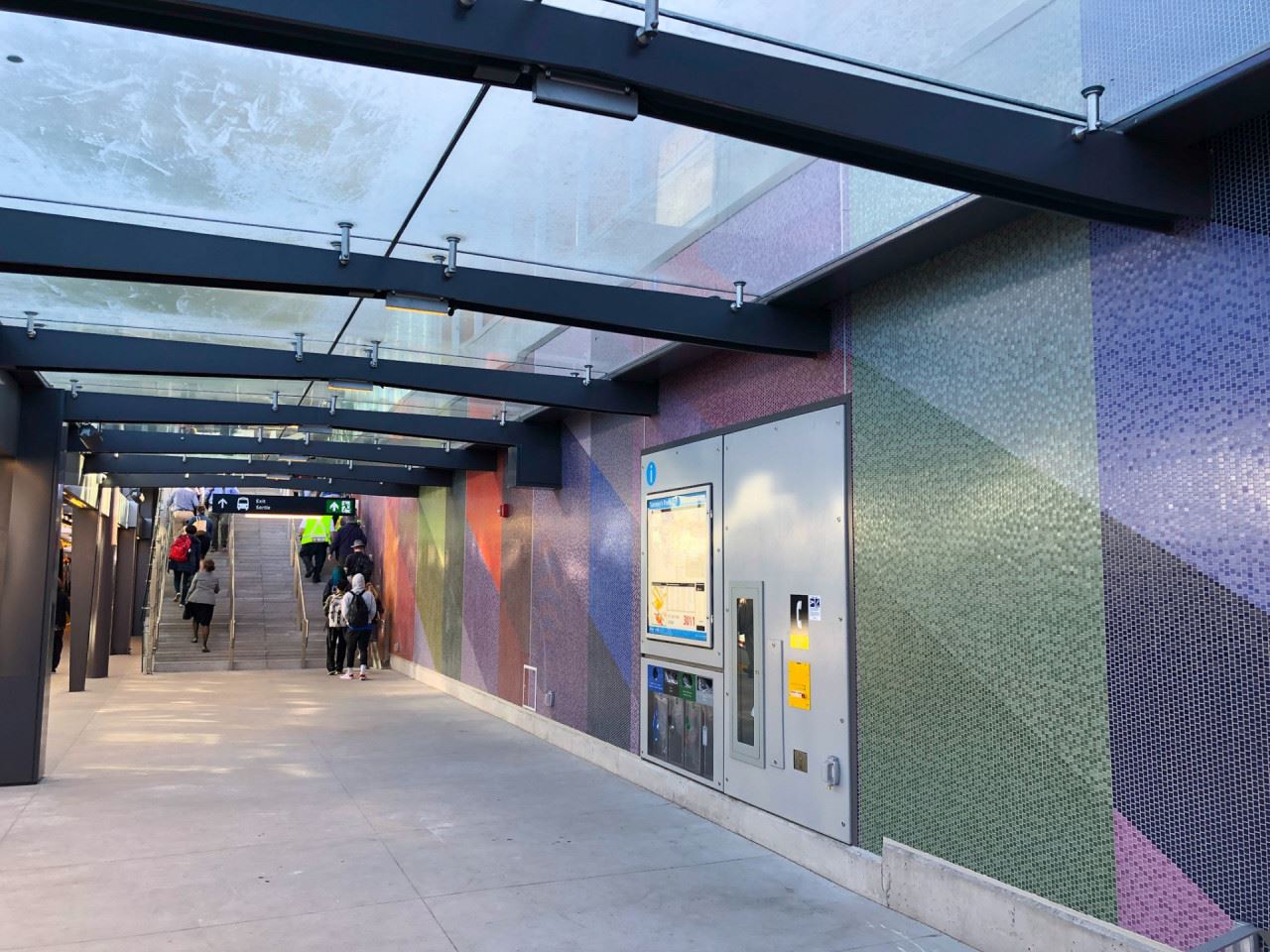 Gradient Space consists of two large-scale glass mosaic wall murals on each side of the platform and one skylight element on the roof of the station.

Derek Root's idea for the Tunney's Station artwork takes its inspiration from the phenomenon of light refraction. The title of the artwork, Gradient Space, refers to the effect of colour gradation that sometimes appears when light passes and refracts through a form made of glass. The artist imagined the transit passengers as being analogous to light. Like particles of light, each passenger travels toward and through the glass station, ultimately dispersing to their respective destinations.

Glass is the principal material for the two-part integrated design. The mosaic wall mural is constructed using vibrant glass tile. The skylight design incorporates brightly saturated panes of laminated glass similar in layout to the wall mosaic. The composition employs vertical bands of colour gradients that are overlapped by diagonal bands of colour gradients. The gradation of angled tones gives a sense of movement and energy to the transit space. 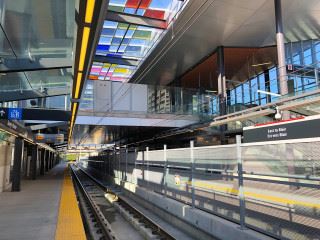 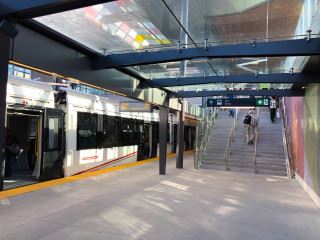 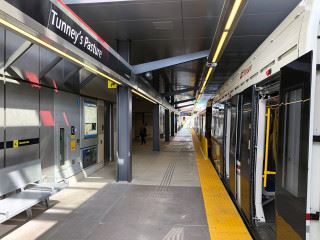 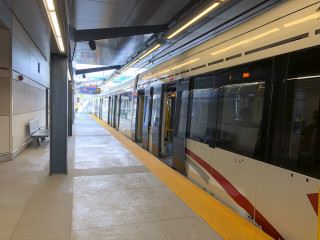 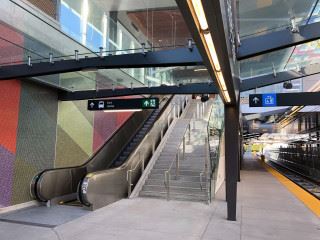 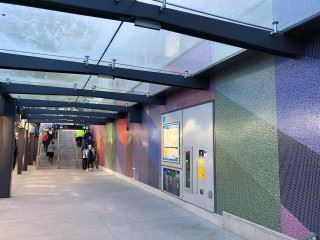 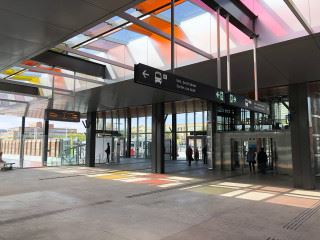 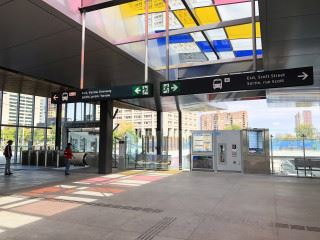 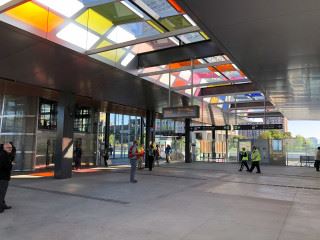 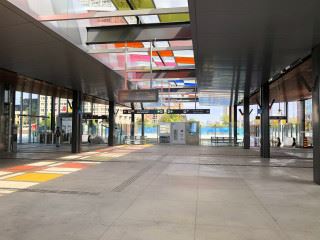 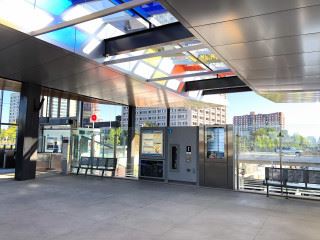 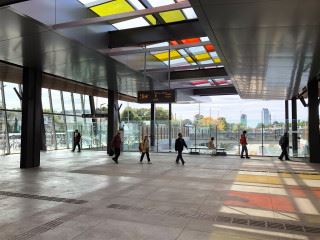 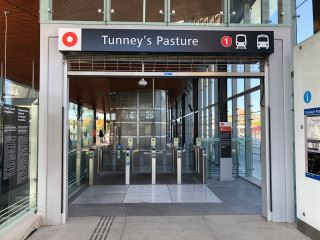 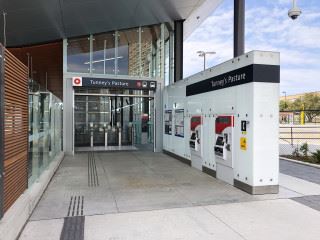 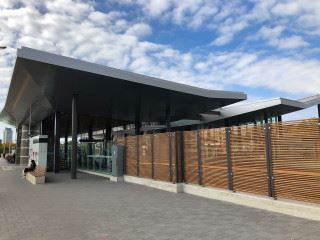 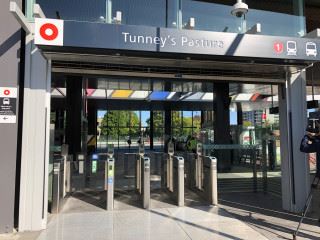 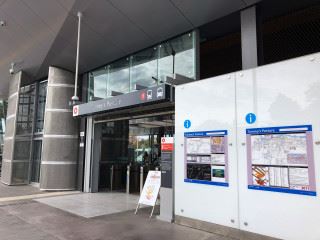 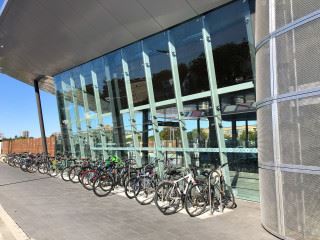