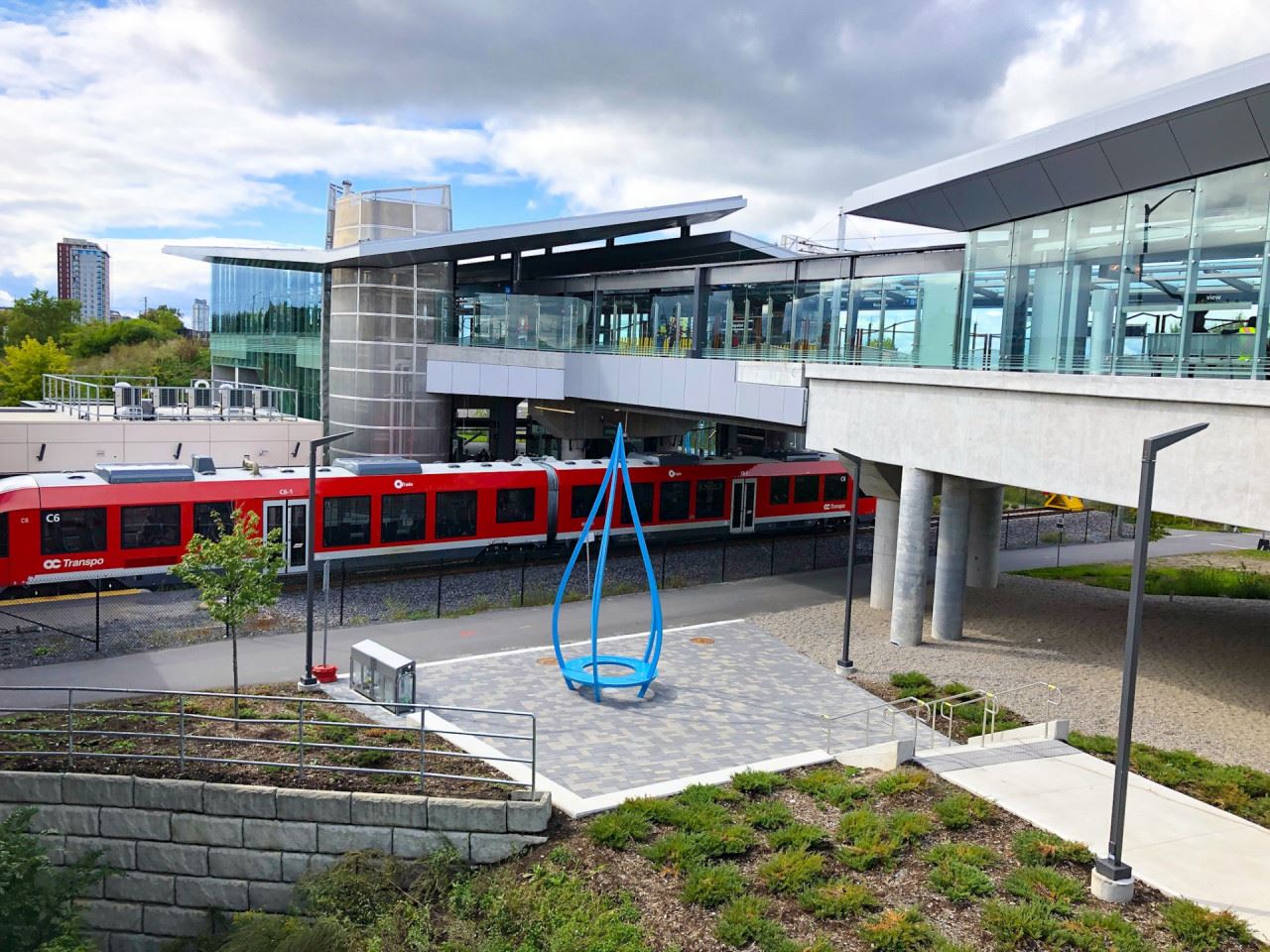 Bayview Station is the O-Train networks only transfer station between Lines 1 and 2, which makes it of strategic importance. Bayview Station is located on the western end of LeBreton Flats, an area that is slated for significant redevelopment in the coming years, with access from Albert Street, as well as the multi-use pathways that surround the station.

The station's design has Confederation Line (Line 1) running above the Trillium Line (Line 2), on an elevated guideway and platforms. The Trillium Line operates from the lower single platform as its northernmost terminus. Transferring between both lines is an easy matter, with the use of stairs, escalators or elevators, positioned in the central portion of the station. With lots of train movements and activity at Bayview, as well as excellent sightlines and views of the trains from above and below, and from the nearby pathways, it is quite popular for railfans and transit enthusiasts alike.

The eastern end of the Confederation Line platforms grant passengers views of the nearby Ottawa downtown skyline, which come sunset is quite stunning to see.

This station is popular for passengers transfering to Line 2 heading towards South Keys in the Southern end of Ottawa. Of course, the biggest usage of Bayview Station comes from students heading towards Carleton University, who are transferring between the lines.

It is important to note that this is the second version of Bayview Station. When the station originally opened on October 15, 2001, it was located in the same position, with the bus rapid transit (Transitway) roadway passing above, in the same location as the Confederation Line does today. The Trillium Line was accessed by long paved pathways that looped down from the Transitway overpass to the train platform below. When construction started for the new station, the old station was demolished, along with the Transitway overpass. The station was then relocated to a temporary location about 150 metres south of its former location. A few weeks before the opening of the Confederation Line, the lower platform at the new Bayview Station reopened to serve the new platform for the Trillium Line. Then on September 14, 2019, the entire station opened and service began on the Confederation Line, giving a much improved, easier and safer connection to the Trillium Line.

Obviously the most unique feature at Bayview is the connection between Lines 1 & 2. With easy access between both lines via stairs, escalators and elevators, the intersection of both the Confederation Line and Trillium Line shines at Bayview as the only rail transfer station on the network.

This station can also be popular for seeing the sunrise or sunset as the view towards downtown Ottawa and the skyline is quite impressive and mostly unimpeded, due to the station being elevated and on a small hill.

Bayview is also unique west of downtown for giving easy access to the Ottawa River Pathway for walkers, joggers or cyclists.

With plenty of windows and areas to get close and personal with the trains, observing train movements is easy at Bayview, whether you are wishing to spot Confederation Line trains above, or Trillium Line trains below. 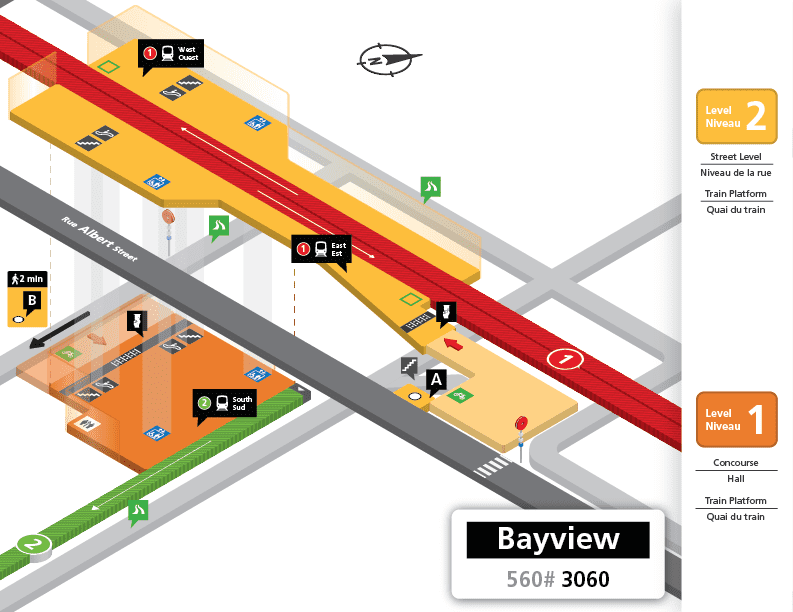 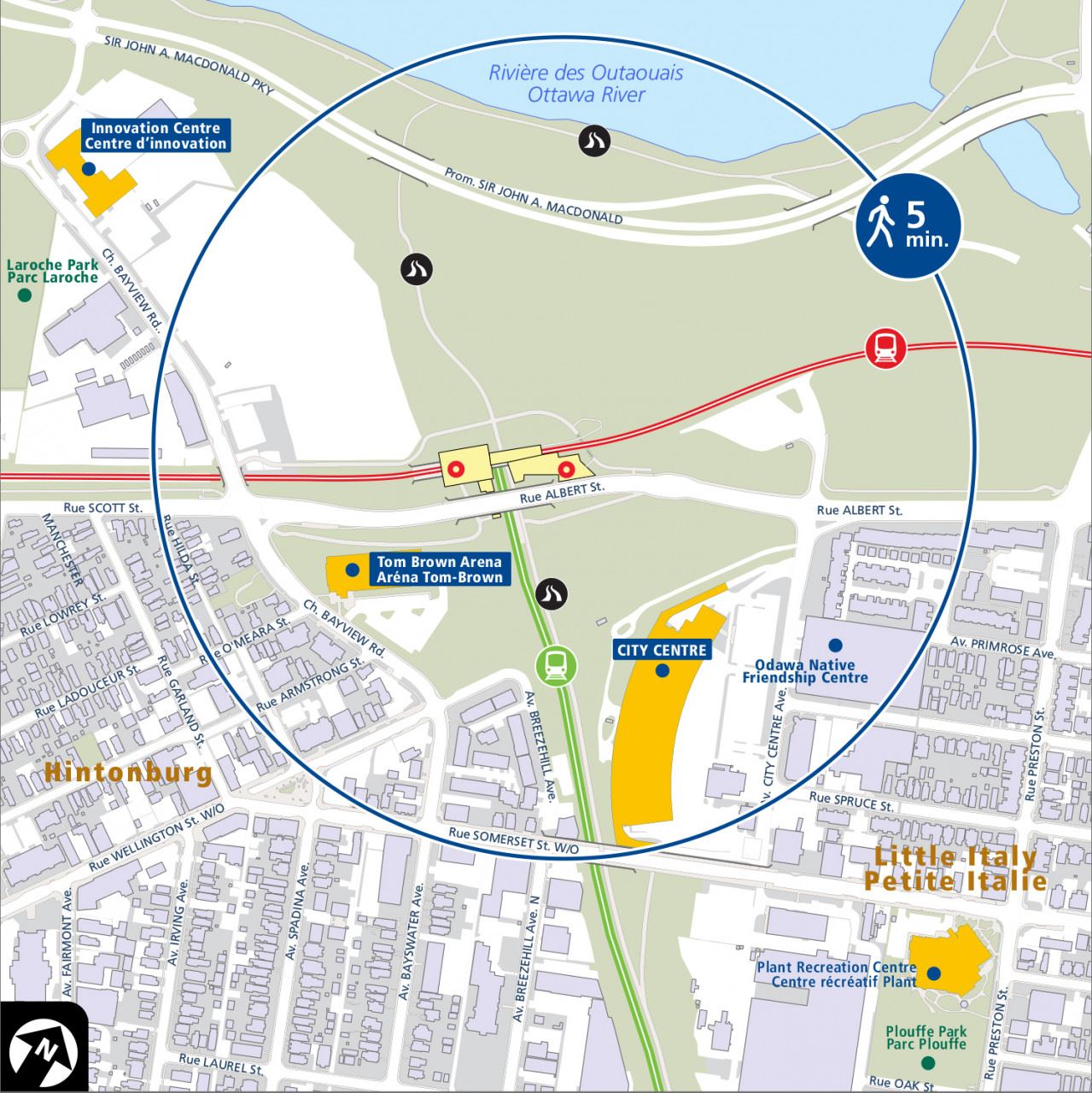 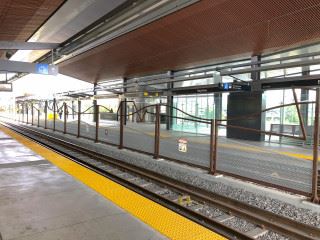 Title: As the Crow Flies

As the Crow Flies is a 120-metre line drawing that traces alongside the train as it moves in and out of the station. Combining the rooflines of local architecture, a silhouette of the Gatineau Hills and the flight pattern of a crow into a single optical flow, the artwork serves to remind passengers of the history of the area and our ongoing relationship with nature. The artwork serves as an inter-track barrier through the full length of the station interior and is fabricated from tubular steel and fencing elements.

The rooflines of houses within the artwork are specific to Mechanicsville, the neighbourhood immediately to the west of the station, so named for the mechanics who lived there and serviced the freight trains that pulled in and out of the train yards at this location. Also included are the distinct outlines of the Canadian War Museum, the Supreme Court Building, the Lemieux Island Water Purification Plant and the Terrasses de la Chaudière Complex on the Gatineau side of the Ottawa River. 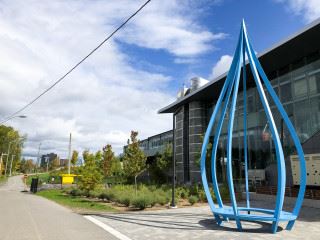 Cascades are laser-cut aluminum sculptures that draw from the rich historical context of the Chaudière Falls, located next to Bayview Station. Chaudière Falls is one of the earliest sites of human occupation in this country, holding great significance as an indigenous spiritual, cultural, and trading hub. Cascades celebrates this past and roots the future of Bayview Station's transformation into a modern hub of spiritual, cultural and economic activity. The sculptures incorporate public seating while remaining rooted in history and nature, expressed through their curved lines and juxtaposition against the linear and industrial station – an act of reclaiming nature in our urban setting.

Visually, Cascades seems to water the land around Bayview station in a symbolic gesture of new communities growing in the area. Cascades also creates a playful dynamic of lines and curves, while speaking to nature and sustainability. It reminds us that no matter our technological and industrial tendencies, we must respect and prioritize our land and water. 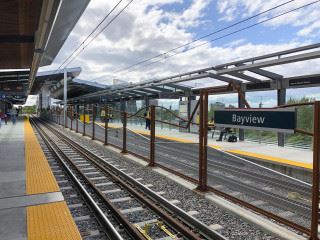 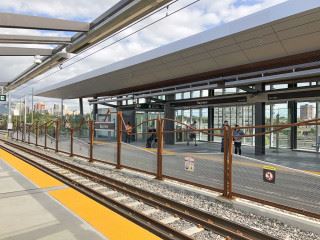 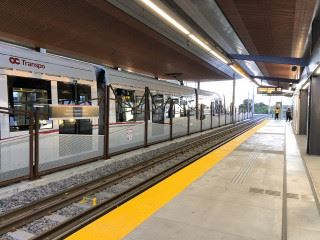 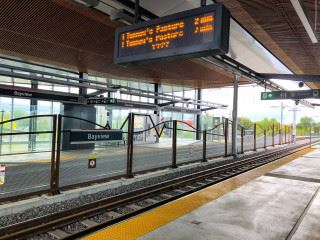 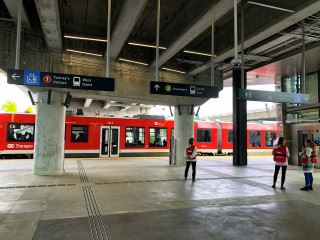 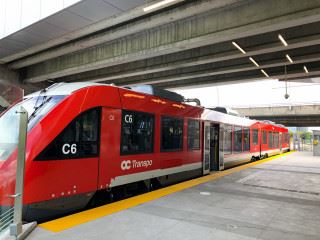 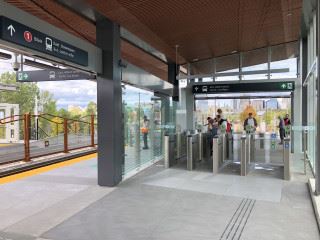 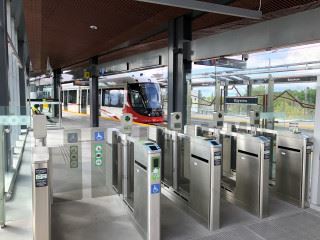 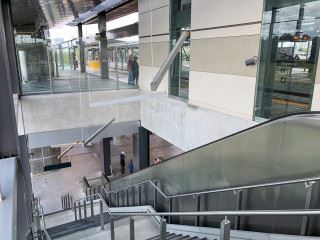 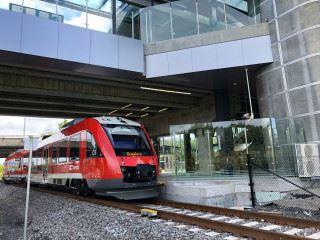 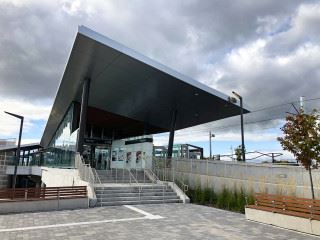 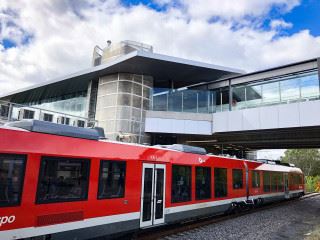 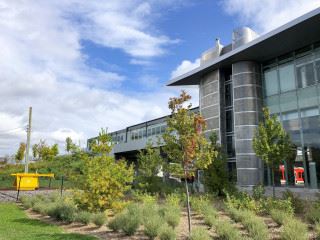 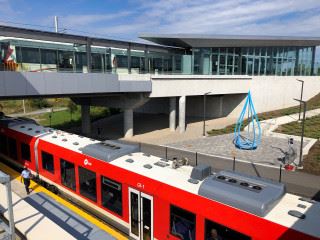 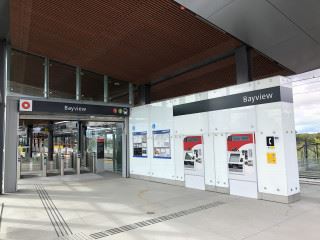 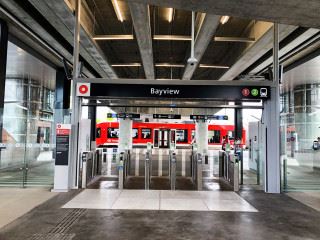 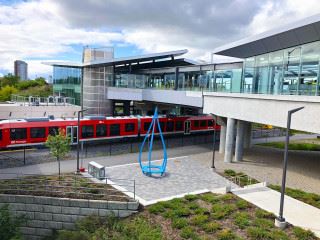 Line 2 (Trillium Line) at Bayview Station is currently closed and in the process of being expanded for the Line 2 South Extension, which will see longer trains and double platforms. Below are some concept renders of the expanded Bayview Station (Line 2), scheduled to open in 2022.

Bayview Station is an existing transfer station on the Confederation Line and also serves as the northern terminus station of the Trillium Line. The existing single-track Trillium Line station platform located on the lower level will remain in place and be extended to accommodate the new longer Trillium Line trains. A second track and platform will be provided on the east side of the alignment to allow the station to operate as a two-track station, creating enhanced operational flexibility.

The two platforms will be connected by a partially enclosed walkway to allow customers access to each platform from the station entrance to the Confederation Line without being completely exposed to the elements.

A new fare-controlled entrance and plaza will be provided at the southern end of the western train platform extension. Located adjacent to the new entry, outside of the fare paid zone, a vertical circulation core consisting of two elevators and stairs will serve a new fully enclosed pedestrian bridge providing the public with a safe, direct, and weather protected connection across the Trillium Line corridor connecting to the adjacent development on Albert Street.

Trinity Developments Inc. has agreed to fund this pedestrian bridge link from their future development at 900 Albert St., which will be implemented through the Stage 2 project. 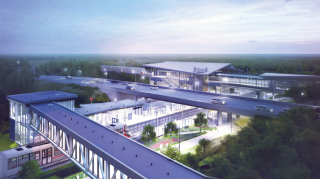 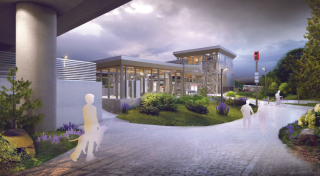 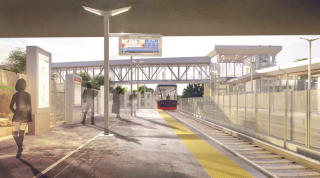 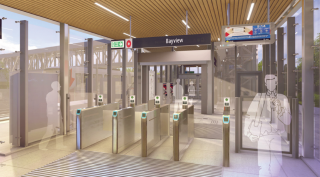